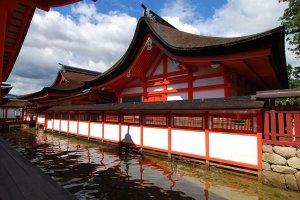 The Itsukushima Shrine is located on the shores of Miyajima, an island in the Seto Inland Sea not far from Hiroshima city. While the name Itsukushima means “island of worship”, the site is more famously known as “the floating shrine”, as the buildings appear to be floating on the water when the tide rolls in.

Beginning in June 2019, the large torii gate of Itsukushima will be covered for renovations until sometime in 2020.

Itsukushima’s main shrine was first constructed in AD 593, and was mentioned in a famous Japanese book (Nihon Koki, or Notes on Japan) in AD 811. The shrine became popular as a pilgrimage destination for members of the Imperial Court during the Heian Period (745-1185) and remained an important location in the Edo Period for those living in western Japan.

The main shrine precinct consists of a collection of buildings, such as the Purification Hall and the stage for bugaku (court music) performances. Many of the buildings are linked by covered corridors and dotted with bronze lanterns from the early 20th century. An arched bridge, dating back to 1557, was said to be used by Imperial messengers and is one of the links between the shrine and the mainland. Most notably, Itsukushima is home to a Noh stage that dates back to the early Edo Period, and is significant for the fact that it’s the only Noh stage in the country that floats upon the sea.

Due to their history and unique design, the buildings of Itsukushima Shrine were designated as a National Treasure in 1952 and became a UNESCO World Heritage Site in 1996.

Visitors who wish to see the shrine as it “floats upon the waves” would do best to plan their visit according to the tides. A schedule of the day’s high and low tides is usually posted at the shrine’s main entrance.

The shrine’s torii gate, sitting apart from the main precincts in the middle of the channel, is one of Japan’s most iconic sites. Measuring around 16.5 meters high, it is one of the first sights to greet visitors arriving by ferry from the mainland. The torii’s main pillars are made from 500-600 year old camphor trees that are naturally resistant to rot and insects. The current gate dates from 1875.

Designated a National Treasure of Japan, this beautiful white-and-vermilion building floats on top of the waters at high tide, just as the famous torii gate does. The extended curved eaves are covered with cypress thatch; the honden (main hall) along with the Haiden and Heiden were built during the Nara period.

The deer of the island are docile and accustomed to human interaction. The cute inhabitants of the island often bravely go up to tourists and beg for food. They're a popular part of any visit to the island and fun to pose for photos with. Although they may seem tame, always exercise due caution when dealing with wild animals.

Travel to JR Miyajimaguchi Station on the Sanyō Honsen Line. Walk to the ferry port. It's about 10 minutes from Miyajimaguchi Port to Miyajima Island by ferry.

Your experience helps others planning their trip

Is this your listing?

Own or manage this property?